Taken: Film, action thriller with a paternal pride virtue. Even taking the Bourne trilogy’s absurdities, this one is beyond the ability to suspend disbelief. You may already know of my loathing for car chases, this does nothing to change my feeling on that. There is machine gun fire straight from "The A-Team". It’s a shame really because the film does have themes with virtues; it’s just as if the director-committees took over. The character set is populated by stereotypes &  parodies, but there is something. The relationship between Father and ex-wife is potentially interesting. Did we really need a super-hero actionman to fix it all up between them though?  If we are stupid- yes. I didn’t hate this film, I just don’t enjoy thinking about it afterwards much.

Cool: the fridge is mended. A valve developed a leak and the coolant evaporated leaving the motor spinning away against air. If that happens to yours, then switch it off- the motor needs the coolant to cool itself down too.
I wonder how my ol’ grandparents’ fridge worked since it was gas powered. 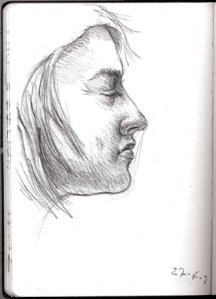 Fix: added an iPod connector to my car stereo, I have routed the cables so that the iPod connector pokes out through one of those blank switches. It’s well worth doing because the sound quality is far better, and the iPod charges up while plugged in.I felt very clever after putting this one in. Making an upgrade is always far more satisfying than repairing something back to its past condition (unless it has been annoyingly "bost" for ages).

The Break: now the fridge-freezer has lost its cold. The motor is making a loud buzzing noise and not keeping either compartment cold. A quick trawl of the web suggests that the compressor has failed and it needs a new one. My guess is a £100 repair bill for that. Cheaper than a new fridge though. Fridges are not interesting.

Delta done (just about): You get to know how these oxbow lakes form around kettle-holes after doing this kind of drawing. the KML file is getting too heavy to manage now, so I need to call a halt soon- there are 190 ponds & lakes drawn in to add onto the ones already present.

This printscreen was taken at the current time & weather, the melt is underway leading to the very short summer, but 24hr daylight.
I will probably make this file available on this site until AvSim is recovered.

This rain: cast my mind back to those summer days at school- the ones where I was a youth. I have never really lost that reaction to others getting a soaking. Well, I say others, I meant women- I still get something from seeing women soaked in rain; okay- it’s just so damned schjecksi!.
mmmmh.
FSX:Drawn Tiksi town, plus some kettle-holes near the airfield. there is a hitch- the site I normally upload and distribute the scenery files from has been busted by a hacker. Perhaps they can restore it despite rumours that suggest not.

Journey home was hard today; that wind.
Delta building: About 75% complete I’d say, the town of Tiksi is misplaced and has the wrong shoreline- I will fix that soon.

There Will be Blood: on a roll now; two great films in a week. This one was very long, again it’s set in the deserts of the US, but the dark tension came from a different direction. This time there was focus on a character Daniel Plainvew, clues were revealed when the lead wanted to expose them. They were not nice things to see, some were only hints but still ugliness was there in a way that created a a heavy, tense and sinister feel. As dark as the crude oil that he was obsessed with. Stupid me, didn’t realise that the lead was played by Daniel Day-Lewis. Perhaps that is the mark of a great actor, or a viewer who doesn’t have a care about celebrity.
This film is worth watching again.

Not far from home: it’s possible to escape into what looks like remote countryside, just church spires are visible in the city, poking above the heavy trees.
Plenty in bloom, small delicate flowers, they are tricky to track down in the reference book. The even smaller blue ones are even more intricate and remarkable. Harder to photograph though. This Fuji pocket camera is really quite poor in many ways. Replacement is looking unlikely because of the bizarre trend towards no viewfinder- how are we supposed to take photos in bright sunshine then?

Near dark sky, it’s an oily blue-black up there. But, you know- twenty past nine…
Repotted a plant with a name like a drug; from the hibiscus family. The Acerecae has gold-glitter in the mud, what is that stuff? Looks like mica.
What is summer going to be like: this is farmland in Warwickshire, but it’s early May!

Kneehigh Theatre: with their version of Brief Encounter, a homage to Noel Coward as much as the original film of 1945. They included "I’m no good at love" (which I’ve included on these pages in the past), along with other songs and passages by him. There was some audience participation, in one scene I was offered a bun, which I ate- it was really quite fresh I should state clearly now. Other nice touches, in the programme, actors’ own brief encounters printed with their shortened CVs.

Rape of a two-year old: I have a really uneasy feeling about this story. I sense the faint scent of a miscarriage of justice: the evidence of a three year old child seems very weak to me- not the actual evidence itself, I haven’t seen that> The problem lies with the notion of taking evidence of such a young child so seriously. I teach 11-18 year olds at work each day, and a number of them have trouble forming sentences that convey what they mean. Let’s wait and see.

SATs boycot: go for it! I’m even tempted to agree with the usually belligerent NUT on this one. SATs are of no use to children, nor to their teachers- it’s a measure of schools for league tables. No benefit then, only loads of stressed children and anxious parents who have been duped by this practice. Okay, yes it may be illegal to boycot the tests, but it’s immoral to conduct them in my view. 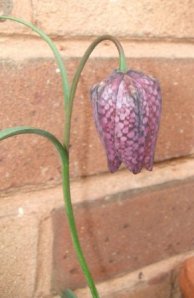 Fritillaria: don’t you just love these little characters, go and sit to watch them in a light breeze.
There is not other occurrence of chessboard patterns in nature, purportedly.