Lovelock says it’s too late (BBC) to save the planet. I’m sort of inclined to feel no surprise. However, my preception is that we’re not going to save the planet because there is no will to do anything apart from talk about it. Number one problem never gets aired, no-one dares even mention it: overpopulation. 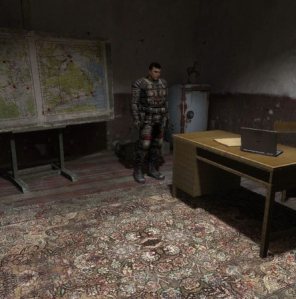 Red-nose; thanks midge, I even dreamed that I had to pull the sting out after you’d bitten me. My hand is swollen and now the end of my nose. The bright red colour is the best bit. Put me in a darkened room and it’d look like a motor-bike’s brake-light.is on.

Hazel is showing off her pink lady-parts: yes it’s time for some garden innuendo, and there’s more where this came from.

In close-up, you can see what looks like pollen. In case you don’t know, the dangling catkin bit is male and distributes pollen, the female parts are extremely small as you can see here.
Good bike ride today, after a weak start- I blame last night’s alcohol for that. It wasn’t until after 40 miles that I really ‘found my legs’.

Domestic day, painting woodwork, fixing things and stuff. Put up the tent in the garden to check its condition. I was so close to going camping last night, but decided to stay and do essential home stuff. Soon though. Energy was bountiful for this, even though it’s the end of term soon. I credit sleeping habits- early nights and very early rises. The earliest was about 4.30 am
Compost news: the heap looks like real compost when I turned it over with a fork.
Can’t help feeling annoyed that my view of the sunset is now blocked by a new housing block that looks like a student halls of residence. In practice, sunset is now an hour earlier. Damn the planners.
Interesting news story: the Catholic Church has been protecting child-molesters from prosecution it seems. They have actively decided to keep secret accusations of child-abuse and not take any disciplinary action.
Laurel: I didn’t really like this Laurel, only because variegated plants don’t, somehow, appeal to me. But look at this fruit, instantly I have changed my mind.Note on the right, the flower- how unassuming.

Hazel: is hosting a guest. I get home about an hour before sunset, just time to plant out some digitalis you’d think. Scoop out some holes and mix a bit of compost to enrich the soil, then clink. So here we go again, two more sub-terainian slabs. One of them is red. So the whole hour before dark (& supper) turns into an earthworking.
Never did get those plants in the ground.

I tried to post this review to ilovefilm but got the error message: "Error- must contain at least two words"

I agree with the positive reviews here, but there is no point duplicating their views here. I can’t understand why so many disliked this film- I have been raving about this one since I saw it last week. For me, the film had a gripping thread about aesthetics, there is a sharply light hyper-realism in the way this was shot. Grim scenes, with grim people were starkly contrasted with images of sheer beauty. The shot with Mia’s mother hanging out the shirts to dry on the balcony with that blazing light filtering through has really stuck in my head. It was like one of those Japanese Samurai shots, in congruous I know. But Don’t you love the way the ugly and beautiful seem inseparable? What about the role of the horse too?A clear five-stars from me.

So that doesn’t count as ‘at least two words’ then.

Ouch; knee pain, though the knee buffeted in that crash last month, I suspect this is caused by the summer bike’s pedals.
more later
Rosie excelled herself today. She’s learned a new trick and played it at a carefully timed moment. When I was outside for a while, she struck. Somehow, and I’m still trying to work out how, she opened the oven door and got the food out. Her motive was very strong- a chicken that the lodger cooked 48 hours previously. Oh well, fair game then (no joke intended).My only concern was that in her greed, she’d get bone splinters in her throat; dogs do that I’m told. I pulled her away by the collar, which she resisted with all her 25kg might and did that cartoon rubberised-telescopic neck thing. That meant however far you pulled the collar, her mouth was still at chicken level on the tiled floor.
Suppose I would have done the same if I were a dog. I’m still impressed, thinking back.

13°C, some rain under grey sky

Corkscrew Hazel : is displaying his man-parts. they dangle and flap in the wind, sharing pollen.  This may be why I have slight hay-fever symptoms. 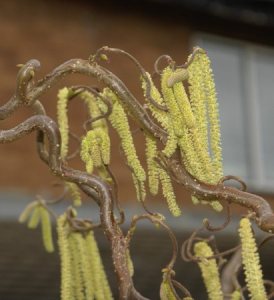 The same plant has opened its ladies-bits too, tiny purple buds just opening; a certain sign that spring is under-way.

Apologies: Pope’s turn, the Pope writes a letter of apology for child abuse by the presthood in Ireland. Apparently Germany are in interested in a similar thing, the RC church have been sheltering child molesters for some time, probably centuries. A few years ago, they apologised for their previous support of the Holocaust during the Second World War too. Let’s hope we get more apologies for other abuses of trust by the church this year, culminating a a big one for centuries of lies and general making-it-up about all sorts of fundamental human beliefs.

13°C, rain has come after a long dusty dry time

Fishtank: Raw, sharply realistic story of a mid-teens girl finding an escape from the dreadful estates around Rodney Marshes in Essex. What impressed me, apart from the almost Mike Leigh social-realism was beauty. There were moments in the film where it was more overt than others, sometimes beauty was just a prop in a scene. there must be something in the association between ugliness and beauty that makes the contrast more stark. Dipoles I suppose.
what about the scene where Mother is putting out the laundry, holding a cigarette while hurling verbal abuse at her daughter. the light in the shirts, the flapping fabric, all white and pure. Other moments- death is close, so is fear and violence but so is the will to survive in an oddly modern setting.
At times, my heart was in my mouth.
Beautiful.

Like last year– waking up absurdly early. Today, 5 am, out of bed by 10 past.
Unlike last year– spring is starting about 2 weeks later here. Some shoots peeking through.

It’s okay Rosie: no insurance required after last week’s report from the Gov’t. They wanted all dog owners to pay for compulsory 3rd party dog insurance. It fell over when it became obvious that the breeds that need insurance are already banned under UK law. BBC