Walk the dogs in this wood to take my mind off dark times at work.

British Govt. have apologised for a joke press release suggesting the Pope branded condoms. I think it’s appalling too, the marketing men will really struggle to sell "Holy Condoms". The upside of the story is that has been demonstrated that a large organisation can apologise for a mistake when it’s still fresh. The Catholic Church could learn from this- they waited fifty years to apologise for their part in the Holocaust. There are numerous other apologies that were either too late, or not been issued yet (Crusades, Inquisition, death threats against Galileo when he discovered moons around Jupiter). Presumably there are thousands of other death threats issued by the Catholic Church that have not been mentioned yet, never mind the millions of actual killings they have sanctioned over the centuries. Did anyone mention child abuse?

Pyracanthus & Ceanothus. bought, planted and settling in.
On the walk home, spotted these growing under a hedge of conifers. What are they?

It looks like a very small horse-tail grass. Hold on, I will go to look it up.
See how dry it is, we’ve had no rain for three weeks. What we’d give to have three dry weeks during the summer holidays.
Today has been a hammock day.

Found it: Common horsetail: Equisetum Arvense. The book I have doesn’t make it clear whether it’s a plant, or a lichen/fungus. I will assume it’s a plant, though it looks like a relatively primitive one. This is going to be one to watch as it grows by a fence at a nearby school. It’s been a very long winter, at last the grass is growing, all bright green and a bit vulnerable, then this guy parks his 4×4 car on the grass verge opposite some empty parking bays. A passing pedestrian and I raise this with him, his excuse? He can’t fit his car in the bays because the back would stick out. My response- my car is the same length as yours and it fitted in just fine. Anyway, the argument became a little heated though not out of control. He agreed that he was bloody minded and arrogant and will park where-ever he likes.
The photo above shows him shouting at me that it’s illegal to take a photo of someone without asking permission first. I said “nonsense, there is no such law”  and then took another photo. He said: how would you like it if I took photos of you? A: Doesn’t matter, I’m in a public place etc.
By now I was annoyed, I really scraped the bottom of the barrel and accusingly “are you a Daily Mail reader? (Yes it got that bad).
He didn’t deny it.
I still wonder where that idea about permissions comes from- it certainly doesn’t come from British law.

"I have been twelve for a long time": a Swedish vampire film. Normally I’d avoid this kind of thing, but not this time. Glad I didn’t too. Thanks for the recommendation Kermode and Holly.

The film was funny, romantic and peppered with that female-juvenile fascination with blood. Vampire stories hold a strong appeal for women (or maybe just girls) I am told. Apart from these thoughts, this Swedish film was made in the winter, in a sharp artificial white light. there are some warnings on teh web that suggest the subtitles are full of mistakes, some of you may have trouble with this. Cinematography had everything it needs to captivate me. Perhaps even a poor film shot this well would do it for me.Wonderful.
I like pictures.

St. George’s day: a patron saint of England. Haven’t stopped to question this before, but why has England adopted a Lebanese man who killed a non-existant animal to be it’s spiritual figurehead? Since he is associated with the red cross on a white background, it would now appear that he’s the patron saint of football hooligans here in the England.

First vapour trails lace the sky again, it’s been six days and the media are rambling on conspiracy theories.

FSX: back into making addons for FSX (the flight sim). After Poland’s disaster last week, I decided to add these missing airports (doing Smolensk South too). It fits in nicely with previous projects because there are RBMK-1000 Nuclear reactors in the East of the city. They are of the same type that blew up in Chernobyl in ’86. They even look alike.

The may have an interesting layer of dust on it, only thin but certainly greyish and very fine. It may not, it could be normal dust, but it remains possible that it came from the mid-atlantic ridge.

Look up! Not a cloud, not a trail slicing up that pure deep blue.

Make the most of this, you may never see this again in your whole life.

Gardening day: planted a Rowan for Mum, which got my energy going and at home I spent 3 hours planting stuff in my own garden.
The red-current was humming like some faulty domestic appliance, the flowers weight it down, more so with the mass of Bumble-bees. 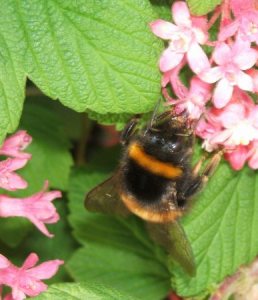 The bush is about as tall as the Magnolia tree and both look magnificent under today’s unbroken blue sky. Really unbroken. For the first time in my life, I have been able to look up at a pure blue sky, no lacerations from aircraft vapour trails. It’s weird, more so because such a thing is probably overlooked by many.
Back to gardening: bought some plants on an unplanned plant nursery visit: I’m giving the Fritillaria another go.

This time, I put them on the edge of the lawn.
Film: Junebug. A sort of American Mike Leigh feel to this one. It’s probably one that will divide opinions: some will be bothered by the lack of a plot driven climax, some by the pace. I was held on by the characters, and by the photography. I say photography rather than cinematography because there were a number of beautifully framed holds, only occasionally was there any movement to remind you that it wasn’t a still. Visually it was very rich. The mood was darkened by that awkward discomfort that can only come from the oddballs in your family.

Re-roofed the shed: see! I told you I’d do a DIY job every week this year I have, if you count gardening. 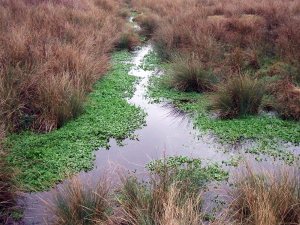 Holiday time. The kit is ready to go but I await fairer weather before I depart. I have mounds of marking, a list of DIY jobs to do here and an unfinished painting. It’s time to get it done.