Icy start, 3°C, wind building.
Found: Soft Machine ‘Fourth’ album. It has no cover but the disc is in excellent condition. It’s the 1971 CBS pressing. There are hand-written notes on the cardboard sleeve; not my hand. It only cost £2.60 whenever I bought it, probably 20 years ago.

14°C, rain clearing later.
Vinyl.
This Mortal Coil: It Will End In Tears.

Saturday morning music time. Seems like the best time for vinyl for me.﻿
The album sounds a bit dated to be honest, but it did lead me towards buying some of the finer examples in my collection: Lisa Gerrard and others.
Some listening sessions follow a path through the collection. While listening to an album, other records spring to mind and they land on the platter next. From a given starting record, there are paths through the collection that form naturally each day. From a starting album, the path is often very alike.﻿

10°C, windy with a dose of sun.
Feeling ill can make us feel inadequate sometimes, as though we have failed somehow. I failed to cycle this week. There was nothing I could put a finger on, just that latent cold feeling.
What must it be like for those with serious, or chronic illnesses?
Anyway, today I wrap. The room is filled with the smell of fresh coffee and milky golden winter sun filters through the skeleton trees.
Playing music to give my ears something to do. 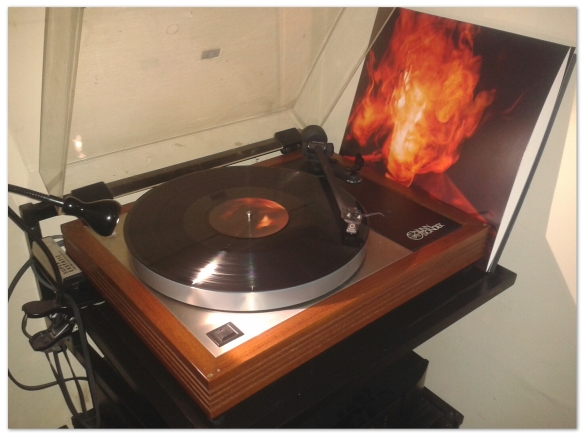 This is a double by Tricky. Too often, I forget how clear this stereo sounds. That record player is thirty years old!
It wasn’t the technology that killed off vinyl, nor the sound quality.
The next album I put on was Led Zeppelin. The sound was clear but noticeably compressed. Producers used to do that so the disc would sound acceptable on cheaper record players. That meant the sound was worse for all of us. Then, along came CD which promised clarity of sound and ease of use. It delivered on the latter. Now, thirty years later, LP sales have risen slightly and occupy a clear place in the market. Modern records, like the one by Tricky, sound better than ever. Producers no long have to cater for the mass market. The sound quality is better though the technology is the same (at our end).