28°C, humid, later breaks down to thunder.
End of academic year- we’ve broken up for summer. What a good day it is when you win the staff Fairtrade hamper in a raffle. I don’t think I ever won a raffle before, and I really like the stuff in the basket. 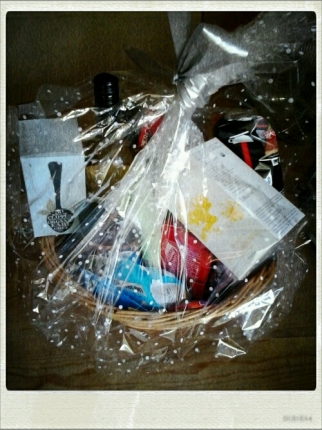 Shock: I got a shock when I arrived home, literally. It was so hot and humid when I got in that I threw windows open to change the air. Then I thought of the lodger’s pet rabbit up in attic room. It gets roaring hot on days like this: I went up to check. A bit untidy and the rabbit seemed okay- he even appeared interested to see me. I reached down to switch on the fan and got quite a jolt. There was a thump to the back of my arm.
The cable had live wires exposed. Mr rabbit had nibbled though the insulation and is lucky to be alive.

Overnight– woken by the slow, ominous approach of a thunder storm. I played the counting game, flash to rumble/7. It was coming directly for here. When close enough, the sound was loud enough to trigger house alarms.
That was about 1am, the same happened at about 4am again.
I love a good thunderstorm.
|~~~~~~~o_o~~~~~~~|
Posted from a mobile.